Bulletin No.27 - Purbeck Chess Club Returns to Outdoor 'over the board' Chess

Bulletin No.27 – Purbeck Chess Club Returns to Outdoor ‘over the board’ Chess

Following several months of isolation and limited over the board chess, Steve Peirson reports on the welcome return to face-to-face combat for some Purbeck Chess Club members.

Although the identities in the first photo above are unclear, the warm weather and apparent risk assessment led to the removal of masks fairly quickly and amazingly everybody turned out to be who they said they were – no Magnus Carlsen masquerading as a Purbeck club member!   Here is Steve’s full report …

This was our first get together since the lockdown started – we thought we’d start with just four of us to see how it went and we all agreed it was a great success.

In the photos above Nick and I sat a couple of feet away from the board and just leant forward to make a move.

As you can see Paul was being a bit more cautious and brought his own board to play with – he and Derek told each other their moves and made the moves on their own board.

Although these photo shows us wearing masks, that didn’t actually last very long – after all, we were sat outside nearly 2m apart on a breezy day so none of us felt there was much risk. It did actually start raining at one point but just as we thought we might need our brollies it stopped!

At one point I made a ‘helpful’ comment about Paul’s position while it was his move and when he followed my advice Derek immediately won his queen so I had to resort to “I was talking strategically, it’s up to you to sort out the tactics!”.

We decided to open it up to the rest of the club for our next meeting on Friday, 7th August. 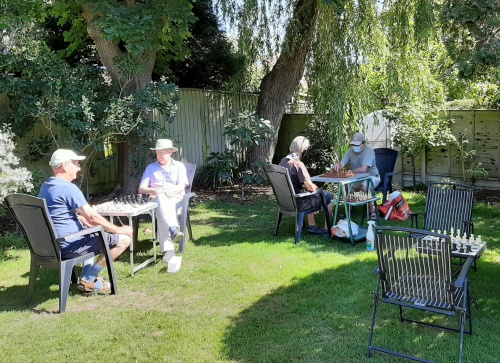 We were hoping there would be five of us but one person couldn’t turn up (he’s been in contact with someone who’s been in contact with a Covid suspect so he’s isolating until the other two have had their test results – a sign of the times!). So we ended up with the same four as last time – Derek, Paul, Nick and me (see photo above). As you can see, it was a glorious sunny day, perfect for outdoor chess!

We normally play from 10.00am until lunchtime but Derek had a Zoom funeral to go to at 11.00am (another sign of the times) so it ended up with me watching Paul and Nick’s game (see photo below).

After what happened last time, I was very careful about making comments on the game but I think Nick did get a bit tired of me saying “Hmm, that’s interesting” after most of his moves!

Derek emerged from the funeral at about 11.30am and he was able to spot a nice mate for Paul which unfortunately Paul missed but I think that lured Nick into a false sense of security and a few moves later, when he was winning, he allowed Paul another nice mate.

Derek has had expressions of interest from three other club members and a couple of his neighbours who are keen casual players (they’ve been to the chess café in Swanage a few times) so I think in future our problem will be deciding who can’t come along. Anyway, a nice problem to have as they say.’

Well done to Purbeck Chess Club for this initiative.  If you have any other good news stories on current chess activities, please send them to Martin Simons or Peter Anderson.