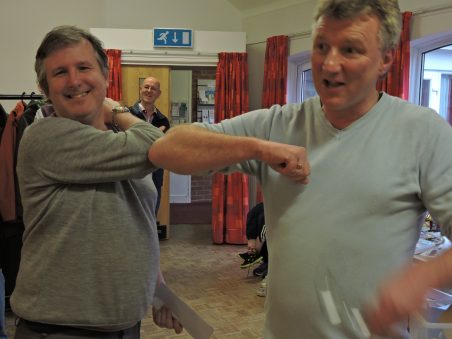 In what might be the last chess congress nationally for some time because of the current virus crisis, the 25th Dorset Rapidplay was very competitive and had a great atmosphere. All 48 competitors went home with a prize. A record for this competition of £920 cash was paid out to winners. GM Matt Turner, 4NCL Barbican, grade 251, was overall winner and unbeaten on 5.5/6. In 2nd were Ian Thompson, 208, Crowthorne and Ian Clark, 178, Wimborne on 5/6. 21 players won cash prizes 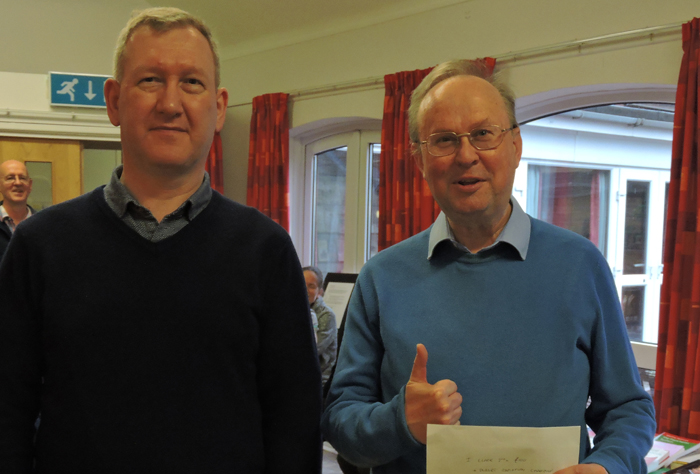 Pictured left,  joint winners of the Dorset Rapidplay 2020 were Ian Thompson, and Ian Clark. Ian Thompson is on the left. Both returned 5/6. They will share the cup for the next year. To qualify, there has to be an association with Dorset, such as being born in the county.

More information and photos to follow. Picture above and at top of page shows Matt Turner (left) and the Rapidplay Controller Martin Simons, enjoying the equivalent of shaking “hands”.

A presentation was made to Martin Simons to recognise his immense contribution to 25 years of Dorset Rapidplays. Martin created the competition in 1995 and has run each one since. He has seen it grow from essentially a Southbourne Chess Club competition to a Congress now attracting players from a wide geographical area, including this year, for the first time, a grandmaster. This has been a great achievement and it was warmly appreciated and recognised by everyone present. 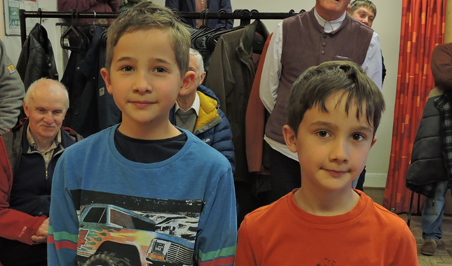 The team prize of £80 went to Fareham whose players were Keith Gregory, Joseph Coburn, Matthew Deacon & Nicholas Deacon. They had an average grade of 130.5 and scored 15 points, just edging out the Ursell family with Christian Westrap, and also a New Milton team of Barry Jolly and Tim Jones, supplemented by Peter Wilcock and Rob Halse.

And below is the Rapidplay wallchart with individual scores etc.

and more photos of the event available through this link: https://photos.google.com/album/AF1QipM7ldurT6h2pabP8wc90zuS_-hn27desw-RXHIp