This is the last of extracts from NewsKnight, which ran for 13 years and 28 editions. It was founded by Alan Dommett and Martin Simons in 1993 so this has been the 25th anniversary of a superb publication. It is perhaps fitting this final piece is a game from Editor and Games Analyst in Chief Alan Dommett. Here he analyses a shock in round 1 of the Dorset Closed when Mike Yeo, defending champion is beaten. As Alan points out, he had an excellent view of the game!

Between them Alan and Martin have been actively involved with Dorset chess for more than 70 years! Alan 30 not out, Martin 40 not out.

Wishing everyone a lovely Christmas break and good chess playing in 2019.

NewsKnight 1996 – Dorset enjoys success in the Sinclair Trophy and promotion

The extract below is from the popular Dorset Chess “NewsKnight” in 1996. 2018 is the 25th anniversary since NewsKnight was first launched. It ran for 13 years and there were 28 editions. Alan Dommett was editor and Martin Simons “Technical Advisor & Publicity”, but others, such as Steve Crisp and Richard Holmes, were very much involved in bringing it out each time. It was a big task.

Not only did NewsKnight contain, amongst other features, some excellent analysis of the games of Dorset players it also provides some history to chess in our county from 1993. For example, in the mid 1990’s on line chess was not yet established, but correspondence chess was very popular as shown below.

NewsKnight was started 25 years ago in Sept 1993, edited by Alan Dommett with Martin Simons as “Technical Adviser & Publicity”. In total, it ran for 13 years and 28 editions. These page copies are to celebrate the anniversary and acknowledge what a popular and much enjoyed publication this was

3 Nov ’18. NewsKnight from 2000 featured this brilliant game, played by Michael Yeo and in which he sacrificed both his knights. Martin Simons reflects on Michael’s “glittering 50 years chess career”

One of the attractions of NewsKnight was it included games sent in by Dorset players for analysis by Alan Dommett & Martin Simons and then possible publication. This game was already 20 years old when Alan analysed it, so now goes back nearly 40 years. Many thanks to Martin Simons who researched and added the background on Michael below. Martin and Michael were the early founders of the current Wessex 4NCL team, but only Martin is still playing competitively from the original team back then.

Michael Yeo was one of the strongest players in Dorset chess, from any era, and retired from competitive chess after playing in the 2013 British Chess Championship. His grade for 2014 was 204. Michael played for several clubs including Abbey Life, Lymington and Ringwood. He was a regular participant in the British Championships and also played in 4NCL for Wessex. His involvement with 4NCL went back to the mid 1990’s when he was one of the founders along with Martin Simons. It is believed his chess career lasted some 50 years. Many thanks to Martin Simons who researched Michael’s chess career and added these comments in conclusion “Mike loved his sharp openings and tactics and was never afraid to slog it out tactically with the top players in the UK, often doing well. I loved watching his games, more so than my own! He has had some excellent results against some very strong titled players. He drew with a young IM Julian Hodgson in 1986, beat GM Pia Cramling in 2004 (one of only two women to be a GM before year 2000), and in his last ever British Chess Championships in Torquay in 2013, he drew with GM Tony Kosten, also beating IM Gary Lane and where he scored an excellent 6 out of 11 – so a fitting end to a 50 year glittering chess career.”

(Please click on the game below to enlarge; double clicking may enlarge further). It also appears under “Games” from the main menu bar and includes Alan’s analysis from 2000

27 Oct. NewsKnight this week is from the start of season 1997/98. Division winners: New Milton A, Merck A, Abbey Life, Merck C.

Celebrating 25 years since NewsKnight started. This NewsKnight page is September 1997. Editor Alan Dommett, Technical Martin Simons + support team production etc. New Milton A Champions the season before. Southbourne’s C team finished ahead of their A & B teams. Merck A had dropped to B&D 2, which they won with a 100% score. “Winton Junior Knights” in B&D 4. The Parkstone club was the forerunner of today’s Poole. There was a chess problem in the “Bournemouth Daily Echo” every Saturday.

Many Dorset players will affectionately remember the excellent publication “NewsKnight” edited by Alan Dommett with Martin Simons as “Technical Adviser & Publicity”, plus other volunteers involved managing production, proof reading etc. The 1st edition was 25 years ago in September 1993. The front page is reproduced (below) along with the league tables from season 1992/93. It was around the time Nigel Short competed against Gary Kasparov for the World Chess Championship.

NewsKnight ran successfully for 13 years and some 28 editions. It was a wide-ranging publication, but especially focussed on games analysis and was of a very high standard. Of course, in 1993 computer chess programmes were in their infancy and it also pre-dates chess websites. Interesting too, that work based teams do not seem popular anymore today, but in 1993 4 of the top 5 in Division 3 were all work teams.

To celebrate and recognise the 25th anniversary, some extracts from NewsKnight will be re-produced over the coming months on this website. 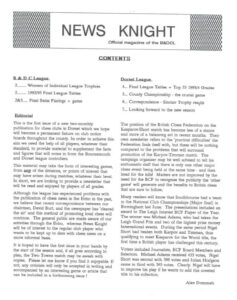 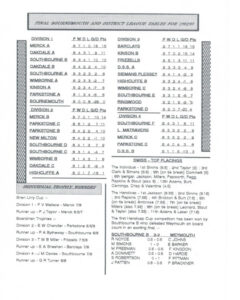