A team will consist of 4 players, but they do not need to be from the same club.

Ideally your team should have a great team name and it should aim for an average rating of between 1751 and 1785 but to introduce a level playing field there will be:

• Bonus points added to your team’s total score when it has an average rating below 1751.

• Penalty points deducted to your team’s total score when it has an average rating above 1785.

This is detailed in the following table … 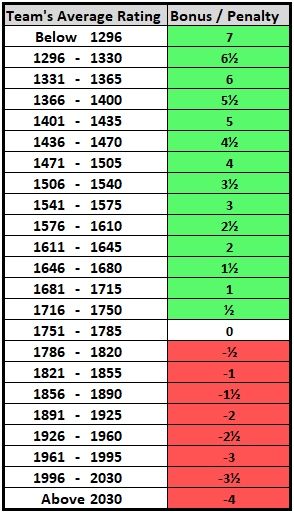 This has in the past made the team event very exciting as the handicap system is a great leveller!

Please let Martin Simons (Non-Gambiteer) know your team of 4 either by email or via a message on Lichess by 2 pm Saturday 5th at the latest. Please don’t forget your team name! There will be a minimum prize of £20 for the best performing team made payable to the team captain.