Bulletin No.22 - Chess at the Cafe Tratt in Swanage 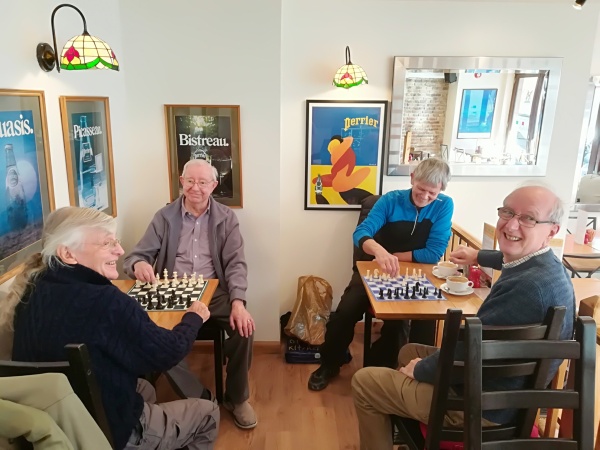 Bulletin No.22 – Chess at the Cafe Tratt in Swanage

With lots of thanks to Derek Mount and Steve Peirson who produced the article.

Taking inspiration from the Flirt Café in Bournemouth, in autumn 2017 Purbeck Chess Club member Derek Mount approached Swanage’s Caffe Tratt owner Bruno Forte to see if it would be possible to play chess at the café on a regular basis. After a successful trial run towards the end of 2017, Bruno agreed that chess could be played at the café on Thursday mornings from 10.15am, starting on the 8th February 2018. There would be no charge but players would be expected to buy a drink.

This has proved very popular. Not only have Purbeck Chess Club members played regularly but also other local chess players. In addition, people on holiday in Swanage have popped in for a game as have students from Harrow House language school. One of the visitors was Florence Spirling who is now 10 years old. Her parents used to visit Swanage during school holidays and her mum Lucy would bring her along to the cafe. The family have since moved to Bournemouth and Florence is now a regular at Purbeck Chess Club and has enjoyed great success in the Dorset Junior Championships, Dorset Rapidplay and Dorset Blitz tournaments!

The Caffe Tratt closes over winter but the chess continues around the corner at Chococo.

Derek also has started a home group to encourage players who may not have played chess for a few years to come back to the game and this is proving successful. So if (post-lockdown!) you find yourself in Swanage on a Thursday morning and you fancy a friendly game of chess and a chat please do pop in to see us.