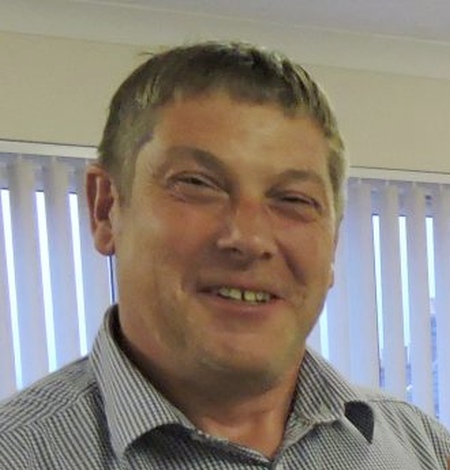 Allan Pleasants is one of Dorset’s leading chess players. In 2012 he won his first ever game versus a Grandmaster when he beat Keith Arkell at the 1st Bournemouth Grand Chess Congress which was reported in the Bournemouth Echo.

Then, in 2017, after a few years of trying, he successfully became the Welsh Chess Champion, an excellent achievement and possibly the pinnacle of his chess career. We asked Allan if he would like to share his thoughts on how he achieved this.

I first played in the Welsh Championship in Cardiff in 2011 and have played in it every year since.    The tournament is run over the Easter weekend which is very unfortunate for me as this clashes with the West of England tournament which I would also like to play in.  But the Welsh Championship, which is held in Park Inn Radisson in North Cardiff, is always superbly run by Kevin Staveley, so I am always happy to go back to it.

To be honest I have never really troubled the leader board in the final stages of the competition, but in 2017 I had been playing very well. I was therefore hopeful that my good form and luck would continue into the 2017 Welsh Chess Championships. It is a closed event but often includes a handful of IMs and 200+ rated players. To be fair, the competition this year was somewhat weaker than normal due to the absence of International Masters Howard Williams and Richard Jones who have each won it many times. It did however include Welsh internationals including Tim Kett, David Jameson and Alan Young.

I had white against Welsh Junior Imogen Camp and this turned out to be a bit of a shock for me. After a tame opening I committed a small error or two trying to squeeze something out of the position and ended up with a poor position. Inexplicably my opponent froze and ran out of time in a strong position. Perhaps an encouraging sign of things to come.

David Jameson played with me for Wales in the European Team Championship, so this was always going to be a difficult game. I played my ‘Modern’ and ended up in a line of the ‘Kings Indian’. I sacked a pawn to gain black square control. The material was returned to me, but I let my opponent exchange the last remaining pair of knights and although I was slightly better the chances of winning were low. At the end of the first day I was rather glad to have 1½ points.

I played aggressively against Paul’s ‘Alekhine defence’ and gained a lot of space, but I missed a chance to play for an early attack on the kingside. However, my queenside pressure meant it was difficult for black to complete his development and a series of mistakes on the queenside led to his pieces becoming uncoordinated and faced with heavy material loss he resigned.

This is the position after Allan played 21.Nb5 which is about level, though perhaps easier to play as white.   The game continues with Allan’s commentary.

Here black gave up. Not only is the black rook in peril after Ba6 or Ba4, but there is great danger on the e-file and the a1-h8 diagonal.

I played Ben in the 2016 Welsh Championship and lost. In this game Ben played passively against my ‘Modern defence’ and I quickly equalised and got a significant advantage. I then got careless and started missing the best moves. Perhaps annoyed with myself I drifted into time pressure and as often happens, blundered. My opponent offered a draw and I accepted without hesitation knowing full well the position was hopeless. I had certainly rode my luck over the first four games and was pleased to be still in the reckoning with 3 points.

Here is the critical moment.

38…Kg6 or 38…Rxe2 win comfortably.   Instead Allan played  38…Rcc2? which loses his advantage. There followed

and to Allan’s relief his opponent offered a draw which he accepted as he is now in serious trouble.

Allan in play at the Welsh Championship

A new day, but a bad pairing for me as Tim was undoubtedly the strongest player (around ECF 205) in the tournament and a formidable opponent especially when he is white. I played my ‘Modern defence’ and expected his usual early punt with h4, h5 etc which can be very dangerous. Instead he played much quieter, but a line I believe he had seen before. The attempted break on the kingside eventually came with the march of the h-pawn up the board, but black’s king was not seriously threatened and white switched to action on the queenside and grabbed my a-pawn. This requires accurate defence as Black will have open lines which he can use – I was happy with this situation. I gave up another pawn to open more lines and create chances. In time pressure Tim failed to find the correct move and dropped an exchange, but more importantly his king was caught in the crossfire of two rooks and a queen.

There are a number of ways to win from here but the very pretty 38…Qa8+! 39.Qa3 Qh1! forced instant resignation as White cannot defend against Ra1+ and Ra8.

Joseph is a tricky tactical player and had been having an excellent tournament. I played the white side of a fianchetto kings Indian and played an early Be3. I held an advantage for the whole game but could not quite find the way to finish off the game quickly. I missed stronger moves that could have increased my advantage and win the game quicker, but I got there in the end. I was now on 5 points and sole leader – could this be my year? 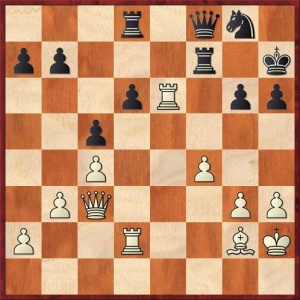 Almost by accident I find myself half a point ahead of the field and needing only a draw to win the tournament outright and be the Welsh Champion. My opponent was Alan Young who is also a Welsh international and a very good tactical player and perhaps rated around 190. He needed to win and I knew there would be no draw offers!

I played the ‘Schmid Benoni’, and achieved a very good position early on with active pieces. His c4, d5 pawn centre was undermined and I grabbed the centre pawn. In the tactics that followed Black is doing well and comes out on top with a nice finish.

Here is the key moment from Allan’s exciting and well played last round win.

It is White to move and his best move is to swap the queens off but this would have given him very few winning chances as Black’s bishops would have dominated. Instead, White understandably went wrong by trying to pinch a pawn with 24.Qxd6? which allowed Allan a nice sacrificial finish with 24… Rxg2! If now 25.Kxg2 then 25… Qg4+ and it would have been mate in 13, we are sure Allan had seen this!

And here Allan played the great interference move to finish the tournament 30…Bd4+! 0-1

Allan also annotated this game which is available here

And Allan received a bonus as he explains

“A really important corollary was that the Welsh Champion is invited to play in the Welsh Olympiad team and I was very pleased to go to Batumi, which is the second largest city in Georgia, the following year. My good performance carried on for a few months after the Welsh Championship as I did well at open tournaments at Sunningdale, Yeovil and Frome.”

Congratulations, Allan – an excellent performance and a great achievement to become the Welsh Chess Champion!