Last Saturday, we reported on how this new online tournament appeared to capture people’s imagination with a free entry and a substantial prize fund leading to an excellent turnout of 60 players and an exciting tournament.

Today, I cover a few games (one from each round) that were decided by one move oversights mainly arising due to the pressure of time. In one game there was even a ‘no move‘ oversight!  We are sure there were a few more games that have slipped under our bloomer radar so perhaps a lucky escape for many! Apologies to those players whose games have been selected.

We then include another Rapidplay Trivia Break.

Finally we look at more games from the winners of the grading categories. There are light annotations on these games by Peter.

It’s White’s 34th move and Larissa has been outplaying her much higher graded opponent and is looking to get her tournament off to a great start.

She is a whole rook ahead (for 2 pawns) but with less than a minute left on her clock she misses the safe 34.Bd3 and instead plays 34.Bc8? when after 34…Bxe4 35.Re1 b2 Black will suddenly be 2 pawns up. Adam went on to win. Bad luck Larissa.

We join this game after Black’s 27th move. White is a pawn up in a Benko Gambit but Black has some compensation, albeit limited.

White plays what he thinks is a good pinning move but he misses that pieces can also move backwards! 28.Re1? Bxb5 29.Rxe8 Bxe8 when Black is a safe piece ahead. Allan went on to enjoy a good tournament finishing equal 4th with 5.5 points.

There were mysterious goings-on in this game as it will be remembered not for the move played but for the move that wasn’t! It is a king and pawn ending and White had been winning only a few moves earlier but when this position was reached after Black’s 47th move we were all expecting the virtual mutual hand shake and shared point.

However, with more than half the time left on his clock, White then surprisingly resigned! After 48.Ke6 e4 49.Ke5 the position is totally drawn. Did Tony hit the wrong button?

In this position after Black’s 28th move, Ian rightly assesses his king’s knight is not well placed and it needs to be re-routed via c2 so it can either be moved to the better e3 square where it prepares g4 and f5 or perhaps to the b4 square to hold up Black’s queen side play.

This is a fantastic plan but there is a slight tactical flaw as Black can simply play 29…Qxb1. Oops!

This position has been reached after Black’s 19th move and is a good illustration of when to look for typical mating patterns. We are sure if Robert was told he had one he would then spot it straight away.

In this position after Black’s 19th move, White has given up his f-pawn for an irresistible king side attack and perhaps should continue with the dangerous looking 20.Bh6.

However, after 20.Ne4?! Bg6 21.Qh6? Nf5! (a backward move, often difficult to spot) the White queen is no longer the trapper but the trapped!

We pick up the game after White’s 17th move. White is better but Black can try the trappy 17…Nf6. 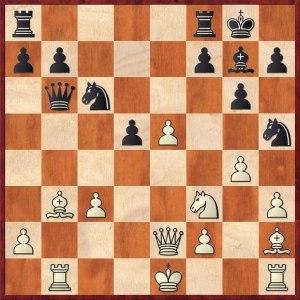 Instead Dan plays 17…d4? and Michael immediately seizes the opportunity with 18.Bxf7+ and it is game over as the Black queen on b6 is lost. Well played Michael and well done for winning a share of the Veteran’s prize.

1. Which local chess player, who still plays in the local chess leagues, won the 1st Dorset Rapidplay in 1995?

2. Who has won the Dorset Rapidplay the most times?

Answers at the bottom of the page

Matthew Deacon had a great tournament; he won the 111 to 125 grading prize and was the top U12 Junior.   But here he is up against Richie Smith, winner of  the 141-165 grading prize.   Richie shows excellent judgement and produces a really nice game, gradually outmanoeuvering Matthew.

Here Tim Jones, winner of the 126-140 grading prize, acquires the two bishops and chooses just the right moment to give them up and grab a pawn instead.


As we covered one of Matthew Deacon’s wins last week, we move onto the 100-110 grading prize which Philip Ware jointly won with Max Teverson.   In this game Philip survives a dodgy opening position and then shows good tactical alertness to build up a winning advantage.


The Under 100 prize was won by David Williams with an impressive 3.5 points. In this game he plays a speculative sac and manages to keep the pressure on his opponent for the whole game. Eventually the pressure told and David produced a mating net.

1. Graham White came equal 1st with Michael Freeman in 1995 which was the Rapidplay’s first year (Gerald Bennett who played for Hampshire also came equal first but he was ineligible to win the trophy). Graham currently plays for Wimborne. Pictured below is Graham receiving his cash prize.

2. Bruce Jenks has won the Dorset Rapidplay 8 times, 4 more than anyone else!

3. The Dorset Rapidplay was not held in 2013. This was because, between 1995 and 2012, it was held in the Autumn of each year at Tuckton Social Club, Southbourne. When the tournament was transferred to The Greyfriars Community Centre, Ringwood, its date was moved to the Spring in March 2014. Pictured below is the tournament’s first venue at the ‘old’ Tuckton Social Club where it was held for the first 18 years before it was knocked down in 2013.

Hopefully we will get back to playing face to face chess in the not too distant future which could mean a return to the more normal ‘over the board’ Dorset Rapidplay next year and also a return to one of its main attractions, a free lunch. However, following the success of this year’s ‘online’ Dorset Rapidplay, there may be a place for both, particularly during the cold Winter months when playing chess in the comfort of one’s own home may prove more appealing.