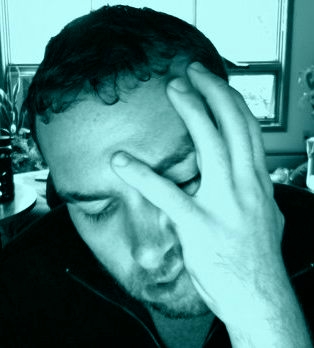 Colourised version of photo by Bletchhhy (WikiMedia) under GNU 1.2

We continue our journey through blunders in chess.   Last time we covered world championship blunders.   Next month we will look at why blunders happen and some howlers by local players.   But today we are looking at:

We hope they make you feel better about your own mishaps!

Kasparov playing black is a little better and trying to work out how to increase the pressure. He chose 32…Rg7 to which Fritz replied 33.Rxe5 exploiting the pin against the rook on f8 (33.Bxe5 is equally as good). Without the e-pawn black’s position collapses and Kasparov had to resign a few moves later. Happily, Kasparov did win a game to tie the six game match.

Roll forward 3 years and it is Kramnik playing Fritz. After Fritz’s 34th move they reached the diagram and Kramnik played 34…Qe3 which would win if it were not for the small problem of 35.Qh7 mate. This is one of only a few errors that has been called “the blunder of the century”. 34…Kg8 would led to a draw.

Kramnik said “I already calculated this line when I played 29…Qa7, and after each move I was recalculating, again, and again, and finally I blundered mate in one.”

In fact Kramnik had played almost perfect chess up to move 29 inclusive and had a very sizeable advantage. If he had not overlooked 35.Qh7 mate he would have presumably chosen a different path and may well have won the game. As it was, he went on to lose the match.

With the better pawn structure and the bishop pair, Botvinnik is clearly better, possibly just winning. He has about 3 minutes for 2 moves.

In Botvinnik’s own words, “It is clear that after 55. … f5 56.Kf2 Kf6 57. Bf3 Be8 Black’s two active bishops, centralised king and pawn majority on the kingside give him every chance of a win. Here I was absorbed by the question: how can Black more quickly win a piece – by creating a passed pawn after …g6-g5-g4, on the h-file or the f-file?”

In fact he was so interested in this question which is several moves away that he forgot to move and was surprised when the arbiter told him his flag had fallen. Fortunately for his sanity he went on to win the match, which was for the world championship.

It’s the candidates quarter finals and the score is 7-7 with two games to play. Hort, playing black, has less than a minute for 6 moves but has a forced win worked out: 35…Qg4 36. g3 Qh3 37. Rf2 Rd1+ and its all over even at blitz speed. With white in the last game Hort sat “entranced at the thought that the match was mine” and didn’t move. He lost the game on time and the match 7.5-8.5

Why Play On At All?

White has just played Rd1. Marco, a strong player, had the black pieces and realised he was losing a piece on the d-file and did the honourable thing and resigned… instead of playing 36…Bg1 winning the white queen.

There have been a few famous games where a player resigned in a winning position but this is one of the most famous and prettiest.

This game provides an amusing twist on the same theme.

Black offered a draw but did not make his move. White asked him to make his move. Black played 28…Qxb2! which forces 29.Kxb3 Rb3+ 30.Ka1/a2 Ra8 with mate to follow. White was so shocked he resigned instead of accepting the draw!

This was published in Not The British Chess Magazine and was voted by Murray Chandler, Tony Miles and 5 other panel members as the blunder of the year for 1983-4.

Even Carlsen Does It

The position is level and almost any sensible rook move would presumably have led to a draw. Instead Carlsen played 45.Rg8? and after 45…Ne7 46.Rxg7 Rxd3+ 47.Kc4 Rd7 was a piece down and despite wriggling hard went on to lose.

From a dead level position 3 moves earlier Carlsen played some dodgy stuff to arrive here where he must play 36.cxb6 and try to survive a pawn down. Instead he played 36.Qc6 only to be shown that he does not recover the piece after 36…Qa4 attacking the bishop on f4, which can be captured with check. He resigned four moves later.

England’s Gawain Jones played his ultra-sharp Dragon and Carlsen tried to rip him apart with 17.g4? only to drop a piece after 17…f4. Carlsen confirmed in the press conference that this was a blunder not a speculative sac.

Staggeringly Carlsen went on to outplay Jones from here and win the game!

The Best by the Best of British

Short had been pressing in this game and with accurate play there is a win, albeit a difficult one.  Nigel’s next move did help matters, as he played 121.Re6 and his opponent duly removed the rook.

Mickey Adam’s blunders are extremely rare and in fact this is the only one we managed to find.   His opponent has sacced a pawn for an attack and  most club players would play the correct 25.e5, returning the pawn and keeping lines closed.

Instead Mickey spent five minutes on 25.Rd7, presumably calculating the intricacies of 25…fxe4+, but after 25…Qf4+ he had to resign immediately in view of 26.Ke2 Rxe4+ picking up the white queen.

The Best of the Worst

We all know that a rook’s pawn and the wrong bishop is nearly always a draw. But Murray Chandler had it all figured out as he played 54.gxh6?? After 54…Kxh6 he would play 55.Kf7 and drive the black king out of the corner and queen his remaining pawn. Zsuzsa (or Susan as she is called these days) did not oblige and played 54…Kh8 leaving the position a dead draw.

Bearing in mind Sztern-Lundquist, we wonder if Murray voted this blunder of the year for 1987?

The great Anatoly would probably be feeling pretty confident against a chess mortal such as Christiansen as he played 11…Bd6??, only to have his bubble burst by 12.Qd1 forking the bishop and knight.

Bronstein in time trouble has just bashed out 35…Nf5. Petrosian with plenty of time on his clock calmly replied 36.Ng5?? only to see his queen whipped off with 36…Nxd6.

And in case leaving your queen en prise is not bad enough, have at look at our last example…

Bacrot has enough compensation for his exchange but not after 23.Qe7?? He didn’t even wait for his opponent to lop the queen off before resigning.

There are hundreds of first rate international blunders and we have tried to pick the most interesting but may have missed some crackers.   Do know of any that were worthy of this list?  We would love to hear from you so please feel free to use the form below.