Bulletin No.30 - The Chess Problem Column in the Bournemouth Echo 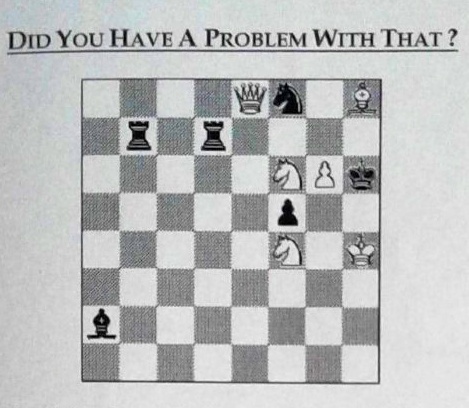 Bulletin No.30 – The Chess Problem Column in the Bournemouth Echo

Welcome to the unreal imaginary world of chess problems!

Many chess players might think that a chess problem is the same as a chess puzzle and/or a chess study. However, although they all have the same objective to find a solution in a possible chess position, they each have different meanings and this is best summarised by the table below.

Therefore a chess problem does not resemble or reflect a real-life chess game (hence unreal) but is made up (hence imaginary) and is designed to challenge the reader to look for unusual themes and patterns. A good chess problem can sometimes drive a reader insanely mad and can, in some instances, take over their life or at least each waking hour of their day as they search in vain for the unique correct solution!

A good chess problem often leaves the reader initially perplexed and frustrated as the most obvious attempts to find the solution do not normally work. However, where there is a will there is normally a way and most keen followers of chess problems confirm they always remain doggedly determined to solve them.

Ivor would always attend committee meetings and AGMs without fail, he would sit very quietly and patiently throughout the two hour ordeal (as he did not actually play league chess himself), then, when it was his turn to speak, he would present his five minute report in very meticulous fashion. David Burt, the B&DCL Chairman at the time, would then thank him for all his hard work but then pleaded to Ivor for him to continue to stand as the ‘Chess Problem Officer’ as by his own admission, he never understood any of them!

During the winter months, often over a 25 week period, Ivor would organise a local chess problem competition through the Echo where approximately 20 points in total were awarded each week for not only finding the initial first key move but also the correct solutions to all the best defences.

Unfortunately, we do not have any written records and as we know, a good memory does not survive the worst ink, but it is known that Richard Holmes (pictured below) won the competition several times, maybe the most times. As mentioned on previous bulletins, Richard lived to become a centenarian. Maybe the secret to his longevity was that he kept his mind active by solving lots of chess problems! 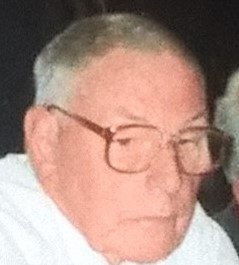 Peter Fowler and Miles Cowling were also winners on a few occasions.

Many of the other readers comfortably found the initial key move but then failed to find all the key defences and often lost the remaining points that were there to be picked up. The winner at the end of the 25 weeks was then the solver who had not only submitted their solutions ‘on time’ but who had accumulated most points. I say ‘on time’ as often many solvers burnt the midnight oil the day before the deadline date, to desperately find the solution at the 12th hour and then drive to Ivor’s home under the cover of darkness to deliver their proudly gift wrapped solution. This was because in those days there was no email nor any other available means to transmit their solutions real-time! Ivor was also understandably unwilling to listen to a solution by a telephone call at 4am!

For readers to find a detailed correct solution each week was one massive commitment as they fought to win the ‘Evening Echo Cup’ as the top solver or the ‘Problem Shield’ for being the best newcomer.

In the following article for Newsknight in 1997 Ivor provides an insight into the mystical world of chess problems by answering the thought provoking question ‘Why Chess Problems?’ 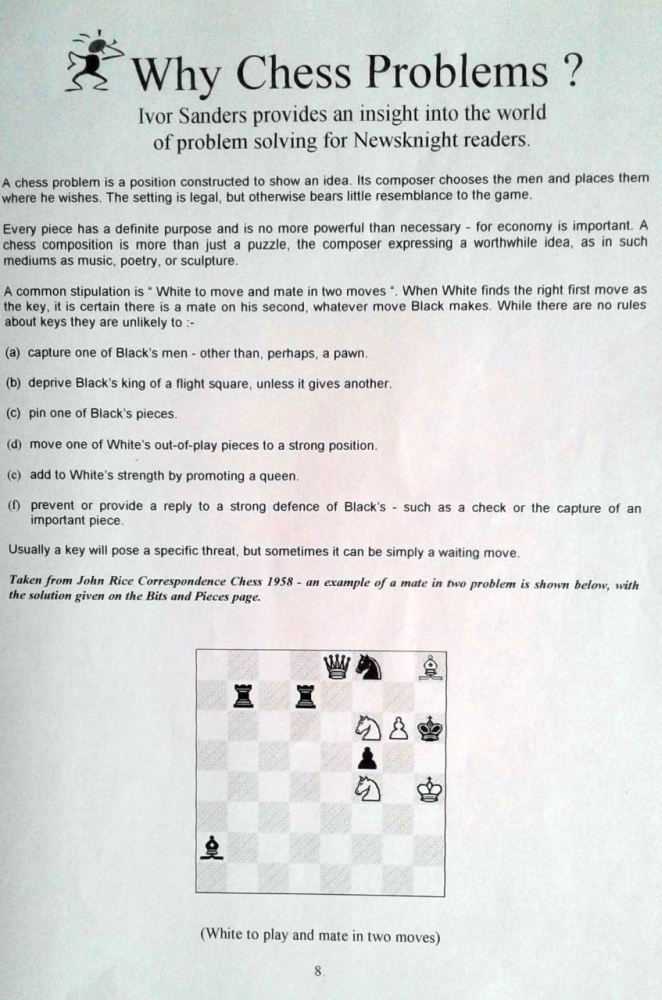 And here was the detailed solution to the problem set above covering Black’s key defences, also given in the same Newsknight magazine …

And six years later in 2003, Ivor wrote a further article for Newsknight explaining what it takes to become a good problem solver and how their mind might work. ‘Mystique (Meg) Newsknight’, in the first paragraph, also suggests that this can all be achieved by ‘staying in more’. Maybe Newsknight was simply ahead of its time given what the government has been recommending relentlessly over the last six months in the current climate! 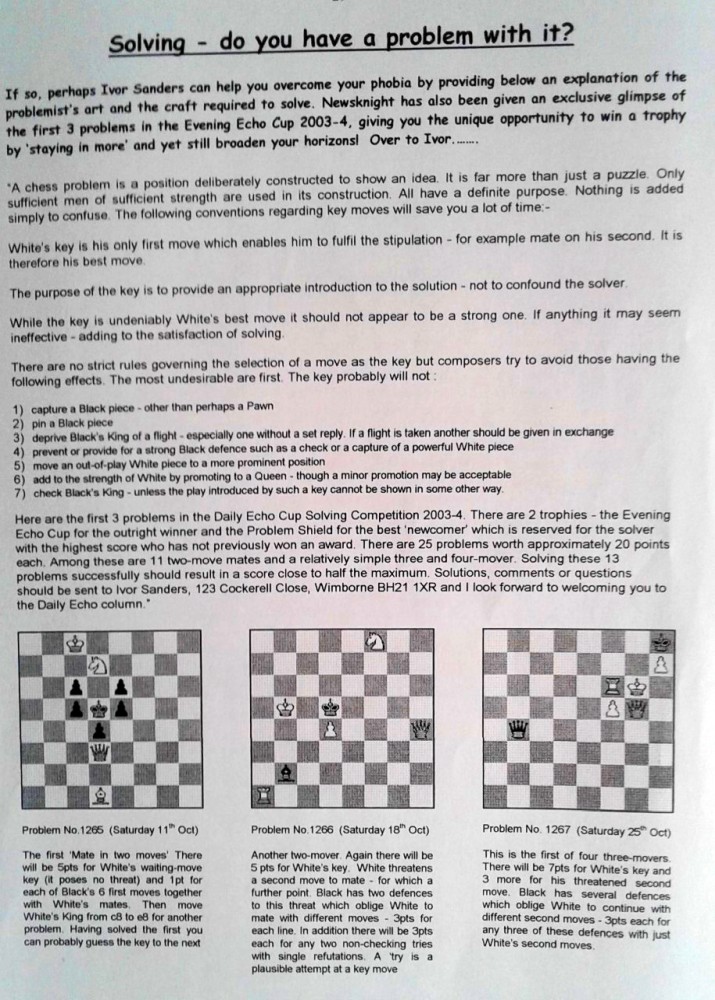 Solution to Problem No 1265 above

After this Bulletin was originally published Roy Egginton kindly sent us more scans of Ivor Sander’s problem articles from the Bournemouth Echo, all of which give a good insight into the types of problems involved and how the competitions ran.  As you will see, Roy won the 1996-7 Problem Shield.