Bulletin No.57 - The Psychological Traits of an Ideal Chess Player!

Bulletin No.57 – The Psychological Traits of an Ideal Chess Player!

A bit of a bold statement, but in chess, as in all walks of life, some people may just be a little more suited to the game than others.

This is a short introductory article, which is designed to be thought provoking, contains some personal views, and seeks, at a high level, to identify the best psychological traits to have, based on the Myers Briggs Type Indicator (MBTI), for an ideal chess player.

Please read the whole bulletin, click on the excellent YouTube link, and feel free to take the personality tests to see if chess is really for you!

After reading this article there is a chance you may think you should have considered being a skydiver, a footballer, an actor, a manager of a chess team (rather than playing) or even a comedian (and we know we may have a few of these amongst us!).

Have you ever wondered how much the psychological aspects of your character play a part in your development as a chess player?

Psychological research has indicated that the way people respond to the world around them is not a random process. Between 1942 and 1975 Isabel Myers Briggs developed a psychometric means of identifying the most characteristic ways in which individuals perceive and judge their world, known as the Myers Briggs Type Indicator (MBTI).

Research of this type did not set out to measure good or bad ways of doing things but merely produced a combination of preferences for the way we think about and react to life.

By answering a host of questions covering all preferences the MBTI personality type is completed and consists of a combination of four characters. The questions used are specifically designed to produce a graph which will highlight not only the individual’s preferences, but also the strength of each trait.

A person’s personality traits and behaviours will be characteristic of these preferences and can be summarised in the table below.

Here an excellent 21 minute YouTube clip by TEDx Talks which explains the above personality traits if you prefer watching rather than reading!

Here are a couple of readily available tests you can take.
They should take no more than 10 minutes each and no email subscription is required!

This excellent first test allows you to explore the results of your Personality Type including ‘Strengths & Weaknesses’, ‘Romantic Relationships’, ‘Friendships’, ‘Parenthood’, ‘Career Paths’, ‘Workplace Habits’, & ‘Conclusion’ which means this test could be of interest for non-chess players too.

The following test has 64 quick questions, the same number as the squares on a chessboard. Hopefully the outcome will be similar to the first test above. Following this test the result of your personality type is explained in more depth and provides your possible career options unless you are retired of course or just want to play chess!

How can the personality traits be applied to chess?

There are a few traits that, either in isolation, or when combined with another trait, could undermine the qualities required of a highly skilled, pragmatic chess player. To keep things simple the main two are highlighted below:

With four pairs, there are 16 personality types in total. By reflecting on the above and putting core ability to one side, the strength of each type in relation to a chess player may be categorised in the table given below. So, assuming players are of equal skill:

How do the World Chess Champions compare?

You would reasonably expect that the majority of the world’s top chess players would fall into one the top 4 MBTI green personality types. Let’s take a look at the last seven recognised World Champions and how people voted when asked what type they thought the champions were.

Boris Spassky on The Personality Database

By having the double whammy Feeling & Perceptive traits, this would suggest that Spassky could suffer a lot at the chess board and indeed, some people argued that he could not cope with Fischer’s idiosyncratic behaviour at the 1972 World Chess Championship. However, his strong sense of intuition and natural ability, plus a great support team, compensated to some degree in other matches.

Bobby Fischer on The Personality Database

A generally shy genius who was very creative at the board, hence his intuitive personality trait, often relying on this than deep analysis, although being an exceptionally strong chess player he probably did this as well.

Anatoly Karpov on The Personality Database

Possibly less gifted than Kasparov but Karpov matched him in World Championship matches as his personality type is more harmonious and very understanding of his own strengths & limitations. This is often regarded by many as the ideal personality type for a good chess player.

Garry Kasparov on The Personality Database

Kasparov’s creative instincts and search for new ideas have to be tempered and controlled by his need to draw decisions to a close. It took him a while but he did eventually come to terms with Karpov’s style.

Vladimir Kramnik on The Personality Database

As well as Spassky, Kramnik also has the ‘Feeling’ trait in preference to ‘Thinking’. However, his strong sense of intuition and natural ability often compensated for the perceived ‘Feeling’ trait weakness, and, as indicated in the Daily Quiz Question No.275, his understanding of the opposition may have served him well when winning the World Chess Championship.

Vishy Anand on The Personality Database

Very shy like Fischer, but a calmer, more balanced individual.

Magnus Carlsen on The Personality Database 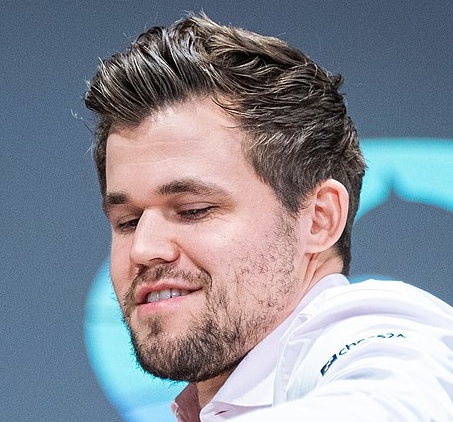 Image is a cropped version of a photo by Lennart Ootes
CC BY-SA 4.0

The only other World Champion (see also Spassky) to have a ‘Perceptive’ trait in preference to a ‘Judging’ one, perhaps showing that some strong players can be curious, spontaneous, adapt well to changing situations and open to new possibilities, without leaving themselves vulnerable to time trouble! There are some people who believe Carlsen is an INTP personality type as he has often said himself that he knows what move to play instinctively and only analyses to support this opinion. If this is the case then Carlsen has very good intuition!

We could start analysing the personality types of local players and there are a few we would feel on safe ground with but to avoid any challenges, potential disputes and litigation proceedings(!), we will leave the reader to make their own assessments.

This has been a quick, informal and fun piece of analysis. However, a bulletin of this nature and size cannot do the topic full justice but hopefully it will whet the appetite and provide a useful introduction for the interested reader to explore further. As mentioned in the article, a good chess player needs to have plenty of enthusiasm, flair and natural aptitude for the game in the first place but the extra competitive edge for two equally gifted players may be determined by which of the 16 personality types they are.

It should also be understood that we all have some personality traits which are much stronger than others and in a chess environment the perceived ‘weaker’ personality trait can often be suppressed or managed.

However, from this analysis, it would appear that if your personality type includes both the ‘Feeling’ and ‘Perceptive’ traits then you should perhaps only play chess for enjoyment. On the other hand, some World Chess Champions have survived with one or both of these traits so there is hope for us all!

So which personality type are you? Please do share your results.