Bulletin No.62 – Blackmar-Diemer Gambit but not as we know it! 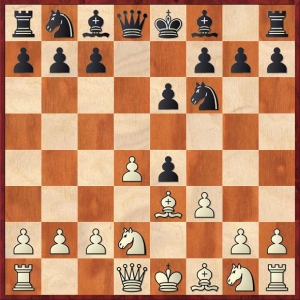 Bulletin No.62 – Blackmar-Diemer Gambit but not as we know it!

Everyone has probably heard of the Blackmar-Diemer Gambit (BDG) and locally, Alan Dommett has even written an informative, entertaining book on it as a tribute to Emile Joseph Diemer, which was published in 2003 and dedicated to Alan’s wife, Marion, (which you can see here on Amazon).

As some of you may know, Alan has been a devoted supporter of the BDG and has secured many exciting victories with it over the years. He even persuaded me to play it with some success at the British Championships. Some critics may argue that it is simply too risky and that against today’s top chess engines it is fatally flawed. However, one cannot deny its adventurous, swashbuckling, not for the faint-hearted style, and as we all know, we do not play against chess engines but against other flawed humans when their ticking clock is not on their side!

What some people may not know is that the BDG is not just for d-pawn players, it can also be played in many other settings as a surprise weapon, particularly against those stodgy e-pawn defences when Black plays an early d5.

In this article, to keep it at a manageable size, Alan and I will show many of these transposition possibilities but mainly focus on how to use the BDG (but not as we know it!) against two of Black’s mainstream defences to e4, namely the French and Caro Kann, whilst also providing ideas against less played defences, specifically the Nimzowitsch and Alekhine. We finish with the Scandinavian Defence but this needs no introduction for BDG players. The lines we suggest have not been extensively analysed but are designed to whet the reader’s appetite to explore further. We also accept the unusual line versus the Caro Kann Defence is not a true BDG but as White is sacrificing a pawn in the main line we have incorporated it. Most importantly, we think it is sound!

To cater for different viewing styles, at the start of each major variation there is a choice between reading down the page or jumping to an interactive board – take your pick!

1. BDG versus the French Defence – The Alapin-Diemer Gambit

The Alapin-Diemer Gambit is an exciting way to play against the French as it steers the game away from blocked positions which many French players love. It is probably not fully sound but some may say the same can be said for many other BDG lines too.

However, this is not the point as one weak move by Black and White can enjoy a dashing game full of sacrificial possibilities, ideal for the fearless Gambiteer!

This is the first part of the Alapin-Diemer Gambit plan. White is encouraging Black to capture the e-pawn and then play a delayed f3. It is surprising how many French players seem to struggle against it as the gambit lines look nothing like a French.

If Black does not wish to play ball, as sometimes happens, and tries to stick with the French by playing 3…Nf6 then 4.e5 Nfd7 5.f4 with an improved French (for White) as White’s queen’s knight hasn’t been committed to c3 meaning that when Black plays c5, White can simply defend with c3. However, this is outside the scope of this article.

This is the second part of the Alapin-Diemer Gambit plan, the knight is often much better placed on d2 than in other BDG lines, where it can swing to the kingside via c4 and e5 or e4 and g5 adding another piece into any attack.

And we all know this move which forms the third part of the plan!

White has a significant lead in development. If Black continues to play quiet moves with 10…Qc7 11.Qe1
b6 12.Qh4 White is completely winning! 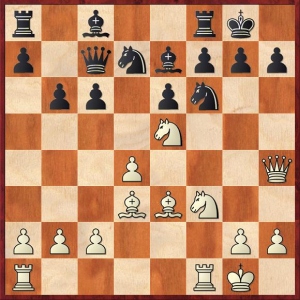 Another natural reaction of a French player when faced with the Alapin Diemer, giving his light squared bishop some air. The problem with this development is that it doesn’t interfere with White’s plans at all.

It looks as if Black has no qualms about castling short.

Up to this point both sides have played sensible moves.

The fianchetto bishop makes this move possible but the attack on the queen has no real effect in this line as the h3 square serves the same purpose as h4 and is arguably safer.

13.Rae1 bringing the final piece into the game is also possible and maybe even stronger e.g. 13…c5 14.Bh6!? and in this wild position White has excellent practical chances!

Although chess engines suggest Black is doing fine, there are plenty of opportunities to go wrong, an ideal battleground for the Gambiteer!

18.Qxe7 White is now better but Black’s next move is a decisive error.

A very natural move but it overlooks a nice tactic.

This is a logical idea to exchange White’s dangerous bishop on e3. However, White does not move the bishop, besides it cannot move to f2 due to 6…e3, but it can be defended by the queen.

This is a standard Alapin-Diemer position and we feel White has good practical chances in over the board play. Here are a couple of ways the game might continue.

This is the standard response but White often gives up the d-pawn.

This obvious and natural move is simply bad and plays into the Gambiteer’s hands.

A great thematic sacrifice to remember!

This looks like it loses a piece but after 16…Qxd4+ 17.Kh1 Be6 Black realises White’s plan but it is too late.

6…c5!? This maybe an improvement as Black gets on with the plan to attack White’s centre rather than allow easy development but White still has good chances.

9…Bxc5? looks tempting to develop a piece and attack the queen but after 10.Qg5! White is substantially better. Nb3 and Nc4 are threatened to start with.

2. BDG versus the Caro-Kann Defence

If White wants to play a completely clean BDG then s/he must choose between either facing the O’Kelly or Ziegler defence. The latter defence is regarded by many as the perfect BDG antidote, with IM Jovanka Houska stating as much in her book ‘Play the Caro-Kann’. However, steering the game into an O’Kelly Defence fairs no better.

4.Nge2!? is our recommended BDG (and most importantly not as we know it!) move to avoid all these technicalities.

It looks a bit odd but White is seeking to maintain a knight on e4 once the Black e-pawn is captured. In our main variation, instead of giving up the f-pawn, the d-pawn is offered and it is this line we will focus on. We will also briefly cover two other lines where Black sticks with the true Caro-Kann with 4…Bf5 and the greedy 4…f5.

We should add that many BDG players would probably like to play 4.f3 to avoid placing the bishop on the weaker c4 square but after 4…Nf6 (O’Kelly Defence) if now 5.fxe4 Black can strike with 5…e5! with a comfortable/better game.

And if we venture into a pure Ziegler by playing 4.Bc4 first then after 4…Nf6 5.f3 exf3 6.Nxf3 Bf5 7.O-O e6 8.Ne5 Bg6! Black sits comfortably although both Alan and Martin have tried 9.g4?! with mixed results. However, if Black knows what to do then s/he should stand a lot better.

White stands better with the two bishops on an open board.

6.Qd2 was tried in Simons v Forster in Oct 2017 as an alternative safer way of playing but it is less exciting and a draw was soon agreed. 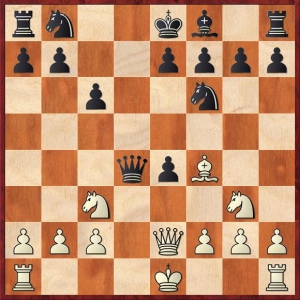 White’s play is all about fast development and this is the current optimal square for the bishop. It also sets a cunning trap. Black now has 3 main choices but all look promising for White.

White is a pawn down but chess engines like White’s position so there is lots of opportunity to explore further! We have been following Simons v Littleton in Nov 2017 which was agreed a draw around here but after 11…Nd7 12.O-O White is already better and after 12…O-O-O? 13.Ng5 the f-pawn is impossible to defend. If Black took the bait with 11…Qxb2 then 12.0-0. White is fully developed whereas only Black’s queen is active and even that is exposed. There are host of interesting lines here but after 12…Qb6 13.Qd3 Be7 14.Qg3 g6 15.Bd6 White is completely winning as there are simply too many threats.

8…e5? This might seem a more natural /aggressive move but it can land Black in trouble.

8…Nd5 This seems natural but is Black falling for White’s trap? 9.Nxd5 cxd5

In summary, there are a host of interesting lines here (with 4.Nge2) and, of course, its main advantages are that it bypasses the mass of theory surrounding a pure Ziegler and it is relatively unknown!

3. BDG versus the Nimzowitsch Defence

7.Qxf3 Nf6 8.Bf4 and White has more than enough compensation. The pawn on d5 is like a thorn in Black’s position.

Maybe in the Nimzowitsch Defence, accepting the BDG pawn on f3 is simply bad but how many players of the Black pieces would know that?

4. BDG versus the Alekhine Defence

We can transpose into a BDG after 1.e4 Nf6 2.Nc3 d5 3.e4 and in about two thirds of the games Black plays 3…dxe4. However, White also needs to know the Hubsch Gambit as Black can also play 3…Nxe4 4.Nxe4 dxe4 but this only represents approximately a fifth of games. In the remaining games (about 10%), Black declines the gambit by playing the French Defence with 3…e6. At least here the White player will avoid the Winawer variation.

Which side benefits from the exchange of knights in the Hubsch has been open to a lot of debate! In the normal BDG the black knight on f6 is often a good defensive piece and the white knight on c3 is an innocent bystander but as more pieces come off the board the easier it is for the defender. One thing for certain is that by offering the BDG the game should look nothing like an Alekhine Defence.

We do not have space to include a full review of the Hubsch but here are a couple of sample games which show White’s potential attacking chances if Black plays the opening incorrectly. We start with a fine win by Diemer himself!

In the following game, Black falls for a common trap!

5. BDG versus the Scandinavian Defence

This needs no introduction and represents the easiest and quickest transposition as after 1.e4 d5 2.d4! it is a true BDG! We need go no further as White can simply play his or her favourite lines!

We hope this has opened up more adventurous attacking possibilities for the e-pawn Gambiteer whereupon even if you don’t always succeed, your games may become more exciting and enjoyable. Good luck!