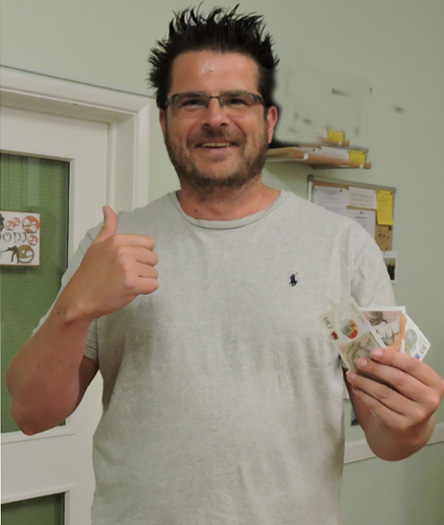 Poole’s Michael Duggan (pictured above) scored an excellent 5/6 to win the Summer Blitz and earn £30 ahead of 18 competitors, who were undeterred in was Friday the 13th (July). Organiser Martin Simons commented “…Michael Duggan (Poole) played exceptionally well, remained undefeated and was a deserved winner”.

Simon Bown (New Milton) had an exceptional tournament winning the Under 120 prize of £20 with 3.5 points, so it was great the top prizes were shared amongst the clubs.

It was a very competitive, but sociable evening and credit to Southbourne who again generously hosted the event at Tuckton. Organiser Martin Simons, as he does so well, ensured that every competitor won a prize. It was the first time that time increments had been used for a blitz tournament in Dorset and this proved most successful as better quality games were played, leading to more draws and less outright blunders. On behalf of all competitors, many thanks to Simon for organising it all so efficiently. Also thanks to the tireless team behind the scenes at Southbourne, especially John Harris, who work so hard setting up and clearing away.

Everyone won at least a book prize and 5 players also won in the free raffle which included a bottle of wine, 4 cans of lager, a chess DVD and 2 chess books.

It was a super evening – all credit to the organisers and players. For score details please see table at foot.

Jamie Littleton & Steve Pollyn shared 4th with other players. It was excellent to see both back playing in a Dorset tournament