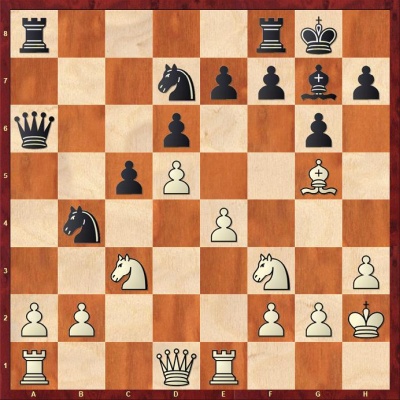 Today we feature another one of Ian Clark’s games, this one from the 1999 Jersey Open. Of that tournament Ian writes:

“I won my first round and then played an up and coming IM in Simon Williams with black and I was whipped! I then lost to a German 2300 player in round 3.

I then started a great run by beating with White a player about 1900. My next match was against a former winner of the Jersey Open G Ballon 2298 and played one of my best ever games, playing what was described as a perfect example of a Benko. This game won me the best game prize of £100 and also featured in Chess magazine.

In 6th round I was confronted by an old adversary in Michael Yeo and played a canny game trying to keep things quiet although this is not my style, and waiting for Michael to over press for the win. It worked giving me 4/6 coming to last round.

I was given an upfloat in last round with black against GM Chris Ward and after a lot of preparation played exactly into the expected line. I was keeping in the game when I blundered on move 26 but it was a great experience.”

Today’s game is the model Benko against Ballon. Notice how as the game progresses white’s pieces all seem awkwardly placed and black’s pieces are active and harmonious. White gradually goes from being slightly better, to equal, and then a little worse, and with one slip is suddenly lost – typical of how a well plated Benko can go. Ian showed his characteristic tactical sharpness in finishing the game.

His game against Michael Yeo will be featured too at a later date.