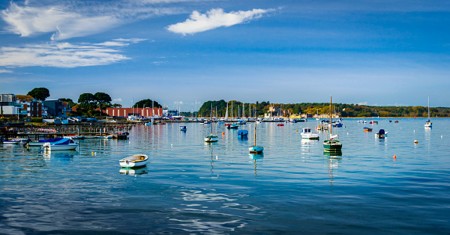 With teams evenly balanced, it was an exciting evening, real end to end stuff and a great opening season curtain raiser!  Due to the closeness of the individual matches, most players stayed to the bitter end to watch nervously as the individual results came trickling in and no team appearing to gain a significant advantage.

With the match score level after 27 boards, it all boiled down to the last individual encounter on board 13 between Tim Joyce (Poole) and Rob Davenport (Bournemouth).  Tim was holding a material advantage on the board but the tension was mounting as he only had seconds remaining on his clock and Rob, with an extra 10 minutes, calmly taking his time, was putting up an excellent defence for the Bournemouth team.  Everyone could hear a pin drop.  In the end, a sportsman’s draw was agreed leaving the match fairly tied at 14-14 with everyone happy and the cup shared, which is the first time since 2001!

Since this annual event started in 1985, Bournemouth have been winners 16 times, Poole 12 times and the cup shared 5 times!

18 enjoy a buzzer evening at Southbourne