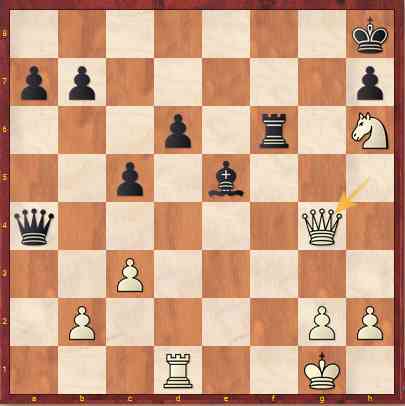 It’s quite clear Allan enjoys playing chess in Wales, and Cardiff in particular! On his previous visit, at Easter, he became Welsh Champion. Then, is a very strong International event, also in Cardiff, he finished 5th out of 54, with the outstanding score of 6.5/10. This position was taken from his last round win v International Master, Richard Jones (2398).

After 27. Qg4? Allan played …Qb3!; what Martin Simons describes as “an excellent multi-purpose move”. This game was played 14 July ’17.

Martin reports that Allan Pleasants continues his fine form by coming equal 5th out of 54 entrants in a strong South Wales International Open being played in Cardiff and which included 13 titled players (4 GMs and 3 IMs!) with a score of 6½ out of 10. Link given below to this event.

His last round win was probably his best game which was against a very strong IM Richard Jones (who himself beat a very highly rated GM with 3 Queen sacrifices in Round 3).

To play through the game and see all of Martin Simon’s annotations please click here.

As Martin points out in his notes, Allan is back playing in Wales shortly, at Llandudno in the British Championships (28 July – 6 August). On this form, combined with another Welsh venue, is anything possible?!