Bulletin No.72 - Endgame Corner: How to Win Opposite Colour Bishop Endings 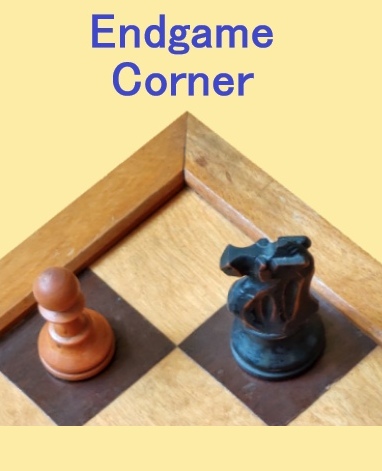 Bulletin No.72 – Endgame Corner: How to Win Opposite Colour Bishop Endings

But opposite colour bishop endings can sometimes be won.  The key is often not how many extra pawns you have but whether you can create two passed pawns.  In fact, as we will see, it can be worth giving up some pawns to create two passed pawns in these endings.  We’ll look firstly at the case of connected passers and then the more common case of split passers.

In most endings (e.g. rook endings, knight endings, or same coloured bishop endings) connected passed pawns are very powerful and are normally winning.  However, connected passed pawns don’t normally win in B+2 vs B with opposite coloured bishops.   As the defending side, generally the best set up is to have your bishop in front of the pawns, attacking one pawn, and ready to sacrifice itself if the pawns advance onto its colour.   So, for instance, the position below is drawn even with White to move.

1.f6 leads to a classic blockade with 1…Be6. If White plays 1.e6 Black sacs immediately.  The white king would like to move to d5 or d6 to support the pawn advance to e6 but can’t because it has to defend the f5 pawn.   If White shuffles so does Black by playing his bishop back and forth between c8 and d7.   White can’t make any progress.

Having the bishop behind the pawns as a defender is less effective.   With White to move, the first of the diagrams below is drawn, but the second is won.  To win the white king needs to be able to penetrate on both sides of the pawns and has insufficient room to penetrate on the h-file alone in the first case, but sufficient in the second with the g and h-files at its disposal. To see the difference and how to win the second one efficiently, click here. 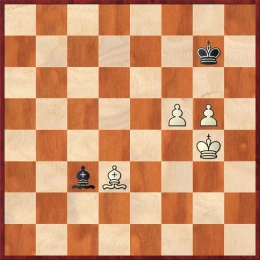 With more pawns on the board, a pair of connected passed pawns can be very strong, as they will often be able to force the win of the bishop, leaving a won endgame.

In the example below Black’s extra pawn on the queenside counts for nothing.  White can create two passed pawns on the kingside – it is just a question of the best way of doing so.  Smyslov, playing White, sacs a pawn to create two connected passers.

Creating split passed pawns is the most common way of winning opposite coloured bishop endings.  The golden rule is to have them as far apart as possible.  In saying that, the attacking side needs to be careful about a rook’s pawn with the wrong queening square for their bishop because in a B+2 vs B ending this will normally lead to a draw if the defending side’s king can reach that corner.

Again let’s first deal with B+2 vs B with split pawns.  How far split do the pawns have to be to win?

So for instance the diagram below is an easy win.  The attacking player forces his or her king to the side where the bishop is and forces the sac of the bishop for the pawn.

Note that if White had an a-pawn rather than a b-pawn this would be drawn, as the bishop is the wrong colour for the queening square and the black king reaches a8.

Below are four practical examples with more pawns that all illustrate the idea of split passed pawns in opposite coloured bishop endings.  A couple of these are quite well known but they are so beautiful that I make no apology for showing them again.  We’ll start with a straightforward example from one of my own games before moving on to some more spectacular GM cases which include saccing to achieve split passers.

Black is a pawn up on the kingside and about to win a second pawn on the queenside by force.  White has a choice of how to give up the pawn – one way holds the draw, the other loses.

In the game below, Botvinnik, playing Black, sets a very cunning trap, which his opponent falls into.  Botvinnik establishes spilt passers and wins.

Earlier we saw Smyslov winning with connected passers. He had another opposite coloured bishop ending against fellow endgame maestro, Averbakh, and failed to win. Averbakh, however, demonstrated that Smyslov, playing White, could have forcibly reached the position below and that this could be won in spectacular style.

Finally, a GM example from more recent years, Shirov’s spectacular win versus Topalov, where he sacs his bishop to activate his king in support of split passers.