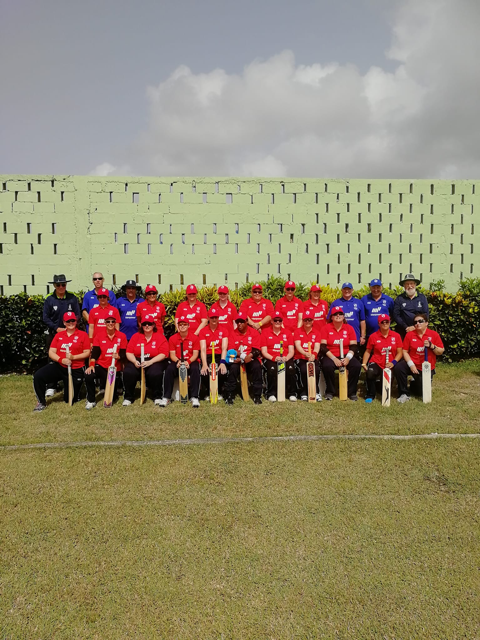 It was an early start on the Thursday morning at Gatwick by 8am, ready for the flight at 11am on Virgin Airlines. The aircrew on the flight were very helpful and attentive to all our needs on this 8.5 hour flight.

Friday was our first practice session where we met the West Indies players and coaches for the fist time and had a 4 hour practice session. That night was the opening ceremony where we had welcome speeches and the national anthems.

Saturday was a free day for the girls to relax and go on trips, whereas the coaches had a 2 hour meeting with the West Indies coaches to finalise any details for the week.

Sunday was a joint 4 hour practice session where Steve Bailey ran the session with the help of 6 other coaches of which 5 were West Indies who said afterwards they had learnt new things and all had a good time. Monday was the first practice match held at Franklin Stephenson Cricket Ground with West Indies batting first scoring 117 for 2 and in reply the England team scored 119 for 1. 1-0 to the UK.

Tuesday second practice match was at the Frank Worrell ground with England batting first and scoring 135 for 4 and in reply West Indies scored 104 for 6. 2-0 to the UK.

Wednesday history being made as the first international visually impaired women’s game played.

The match was at the Winward Cricket Ground with West Indies batting first and scoring 40 for 8 and in reply England scored 41 for 0 with Lois Turner and Amanda Large reaching the target in 3.5 overs. The team was really up for the game and all the hard work over the last 3 years came through. 3-0 to the UK.

On the Wednesday evening we were invited, with the West Indies team, to meet the British High Commissioner at the British Consulate where drinks and canapes were served and where we had time to mingle with other guests who were there to promote blind cricket.

Thursday saw the first ever day/night match and it was played at the Briars Hill ground, with the West Indies batting first they scored 149-1 and in reply England scored 125-7, thus meaning a win for the West Indies. The England team found this a difficult games, having never played or trained under lights, so all the players had a go at some point in the game to experience this.

Friday saw the 2nd full international game and it was a day/night one, held at the Friendship ground, West Indies batted first and scored 111 for 6 and in reply England scored 61 for 0 after 5 overs. However, due to West Indies injuries, they forfeit the match so meaning an overall score of 4 wins to the UK and 1 to the West Indies. Then followed a series of presentations to the players and a trophy was given to the UK team. It was a very pleasant experience and an enjoyable time was had by all. It was a once in a lifetime trip for some of the team; the coaches learnt a lot and the future is looking promising for the team.