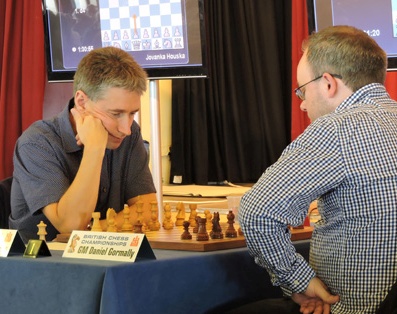 The British Chess Championships is seen by many as the annual highlight of the UK chess calendar and it was a sense of great achievement that we finally managed to secure its return to Bournemouth in 2016 after 80 years absence.

Today, in Part 1, we cover how the idea all started, how we overcame a few hurdles to secure its return together with its build up including the Opening ceremony. In Part 2, we will be covering  some excellent results by local players and a couple of interesting games, including a local game and a game from the tournament winner, Mickey Adams, who achieved a joint record performance. Further, we will provide coverage of the Closing Ceremony and our final thoughts.  In Part 3, we will focus on games by local players to wrap up these memorable Championships!

It all began with the resounding success of the B&DCL’s 1st Bournemouth Grand Chess Congress at the Carrington House Hotel in Bournemouth in April 2012, which attracted 4 Grandmasters, over 150 competitors, and much publicity in the Bournemouth Echo: Sensational Upset At Bournemouth Chess Tournament

However, we were all very ambitious to further place Bournemouth on the UK chess map so we then started to focus on how we could bring the British Chess Championships to the town; after all, the last time these were held in Bournemouth was way back in 1936 when it was won (probably in black & white!) by William Winter.

Meeting with the ECF (first hurdle)

At our internal meeting it was agreed the best course of action was to approach the ECF to discuss the idea, to establish if it was a viable possibility and what the ECF may require from us. A meeting was booked at the London Chess Classic event at the Olympia Conference Centre in December 2012 with Alex Holowczak who was on the ECF board and, at the time, actively involved with organising the venues for the British Chess Championships.

Martin, Phil and Ian travelled to London with much enthusiasm and lots of great plans & aspirations. The discussions were useful but there was one major sticking point – Alex insisted the host venue had to be free to the ECF, and as we all know, finding a free venue for a two week period in August in Bournemouth at the height of our summer tourist season was virtually impossible. Despite our attempts to persuade Alex of the financial and attractive array of seaside benefits of holding the British Championships in Bournemouth, including an expected high level of entrants, we could not persuade him to change his mind.

We all came away feeling a little dejected and thinking our ‘excitable bubble’ had burst at its first airing.

But all was not lost!

It was almost two years later at the British Chess Championships in 2014 in Aberystwyth, following a change in ECF management at the helm, that we were given renewed hope. Kevin Staveley was now the ECF British Championship Manager. Following a conversation on a separate matter, Martin gently raised the Bournemouth British Championships again with Kevin, but this time we had a little extra financial backing. Due to the continuing financial success of the Bournemouth Grand Chess Congress, Martin suggested that there could be some extra local funds available to contribute towards the cost of a local venue. It just so happened, from Kevin’s perspective, that the current 2016 host venue for the Championships was in doubt so the timing for our chat could not have been better for both parties. Kevin instantly recognised the commercial possibilities of a ‘Bournemouth British‘ and how it could attract more entries, so he was very interested in the venue we might have in mind. Venue … oh yes, a minor detail!

Choice of Venue (another hurdle)

By 2014 Phil had stepped down as B&DCL Chairman and was now concentrating on his Germany adventures, so over the next few months, it was left to Martin, Ian and Alan to focus on finding a suitable venue, worthy of holding such a prestigious tournament. As Martin regularly danced at the Bournemouth Pavilion, he believed this would make an excellent British Championship venue choice with its very large ballroom, a few feed off meeting rooms and with excellent views being right on the sea front – let’s forget about the parking charges!

The 1920s venue had retained its splendour and elegant style and was perfect for a chess tournament. It became a Grade II listed building in 1998 to protect its future.

This was therefore always going to be our first port of call although other venues were considered such as the Bournemouth International Centre. However, we were a little concerned about the initial high price quoted to exclusively hire out the Pavilion for 15 days. This was a major challenge and with Ian’s connections at the Bournemouth Council, we explored other possible sponsorship opportunities. Unfortunately, these did not quite materialise despite a lot of work and effort on Ian’s part. We then considered and explored other venues which might be cheaper (or free!) such as the local schools and Bournemouth University but these were also unsuccessful. We were then left struggling looking for ways to afford the Pavilion, which, in our hearts, was our choice of venue.

Then came our White Knight …

BH Live (the owners of the BIC and Pavilion) were really impressed with our submission and, over time, warmed to our cause. They wanted to support us in our ambition and adventure, so, after several rounds of meaningful negotiations, it offered us the Pavilion at a much reduced price. Martin, Ian and Alan re-evaluated the revised outstanding offer and considered, with all the excess income from the three Bournemouth Grand Chess Congresses that have already been held (and with a 4th one due in 2015) plus the possibility of local clubs generously contributing, we believed we could fund about half of the venue costs. Luckily, and most importantly, Kevin Staveley, with his commercial hat on, accepted our calculations and during 2014 and 2015, Kevin came down to Bournemouth from Wales (with his mum!) a couple of times to view the Pavilion. He met up with Martin, Ian and Hayley (from BH Live) and was immediately impressed with our venue choice. To cut a very long story short the contract was ‘signed’ by the ECF in June 2015 just before the B&DCL and DCCA AGMs when it was announced to our local members who all responded with tremendous positivity and enthusiasm.

Build up to the Championships

Now that everything was agreed the wheels were set in motion to run the event, which included producing the excellent championship programme

There was a lot of excitement amongst the local chess fraternity and also the local press became interested, including several reports in the Bournemouth Echo …

In addition, Dorset Magazine did a high profile feature on the Championships just before it commenced … Grandmaster Clash

One further hurdle, being an old grade 2 listed building, the Pavilion had no wifi but the ECF managed to overcome this by purchasing several dongles and these worked well. 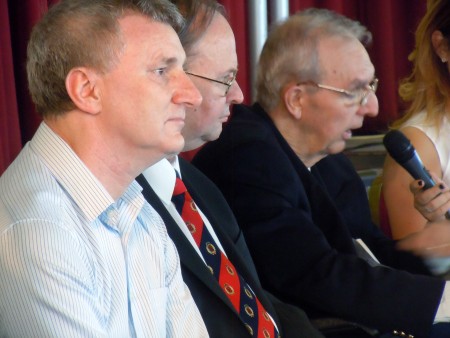 Alan delivered an inspiring speech including covering a brief history of when the Championships were last held in Bournemouth.

And so after four years planning and hard work the scene was set for the chess to finally begin!