Bulletin No.45 - The Stunning Stafford Gambit

Bulletin No.45 – The Stunning Stafford Gambit

Martin Simons offers a personal view on the attraction of this gambit.

Be afraid, be very afraid, there is a new gambit in town!  Until 2020, it was hardly known but maybe because of Lockdown and the vast numbers of chess players migrating across to the online blitz chess platform the Stafford Gambit has now become the talk of town! This increase in activity has also been helped by the fantastic work undertaken by IM Eric Rosen, Jonathan Schrantz and ‘The Butcher’ (IM Miodrag Perunovic).

So fasten your seat belts, enjoy the rollercoaster ride, as there is likely to be many bumps and bruises along the way!

The material is divided up as follows:

(A) Assessment on the Starting Gambit Position.

(B) The Gambit’s 7 Deadly Sinful Traps!

(C) Detailed Analysis on the 7 Traps.

(D) The Refutation Lines and some practical suggestions how to play against them.

(E) Summary and Where Next.

(A) Assessment on the Starting Gambit Position

Black seems to have given away a central e-pawn for no compensation at all. Indeed, if we were to set up the position on today’s strong chess engines, their assessments would be somewhere approaching +1.50 in White’s favour which suggests a potentially winning advantage after only 4 moves! However, this only tells half the story. Here is a summary of some of the other important exciting factors to note in the Gambiteer’s favour!

So hopefully this introduction has whetted your appetite. It is my belief that this gambit is ideal for the creative, combative player, especially in blitz chess, who is prepared to ‘sac the lot’ to create real ‘crazy winning chances’!

(B) The Gambit’s 7 Deadly Sinful Traps!

We have previously covered the 7 Deadly Sinful Traps for Black in Bulletin No.38. With the Stafford Gambit there are (at least) 7 traps wrapped up in one opening!

Given below are just the main traps which White can fall into, I am sure there are many more but they do provide a flavour as to just how very trappy this gambit is!

To assist the reader, to gain an immediate appreciation and understanding, the core basic traps will be given with helpful diagrams below. However, to follow each trap in more detail and have a greater understanding, then please see Section C and click on the interactive boards.

We start with perhaps the most well known trap which has caught out so many players of the White pieces!

This seems to be the most natural move to pin the black knight against the queen, especially as Black’s bishop has moved to c5.

This is what makes the trap so good. White has played the 2 most natural developing moves yet is now far worse. It is understood that the strong American Grandmaster, Nakamura, may have fallen for this trap in a Blitz game.

This is the only move to save White but it allows Black to regain a pawn with a much better game.

Black has regained the pawn and is substantially better as White is hopelessly weak on the dark squares and is a long way off from castling (on either side).

This is a very understandable move to avoid Trap 2 and to deny Black the opportunity to play Ng4. However, it does allow Black to play an interesting piece sac which may not be fully sound but is great fun, particularly in Blitz chess, and can lead to the White king being chased around in the middle of the board! Unfortunately, for White, we are not playing ‘King of the Hill’ (see Bulletin No.39)! 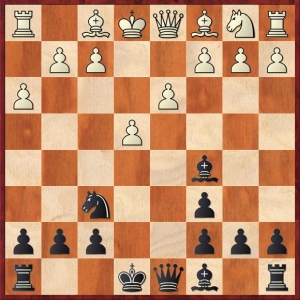 Black has excellent chances despite what the chess engines might say. In any case, it is very enjoyable to play!

The threat is Re8 mate!

The point behind Black’s last move. White now has a number of sensible moves (However, Black maintains a good
initiative) but the most obvious 8. h3? isn’t one of them. 8…Qd6!

Now all of White’s moves lose on the spot except one (this is covered in section C).

There is no defence to mate on h2. So many online games have now finished with 10.g3 Qxg3#

Again, a very natural move to play but White misses Black’s next move. 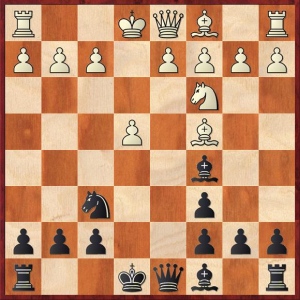 After only 7 moves, Black is completely winning!

White’s moves are very much geared towards preventing Black from generating the normal kingside attack but the last move is a mistake.

7…Qd4! An excellent move guaranteeing an advantage for Black.

It appears White has everything covered (and this is why this line is so good for Black) but then 11…Bxf2!

This is brilliant. The idea is to stop White from playing Rh1 in response to Qh5.

This seems a very natural move to play kicking the knight.

A well disguised trap. Black is already winning after only 6 moves!

Please note White has no 9.Bb5+ uncovering an attack on the queen on d1 as there is a pawn on c6 (and Bb5 is therefore not check!) as mentioned in Section A.

(C) Detailed Analysis on the 7 Traps

If you wish to see the interactive boards below from the Black side, please click the circular arrow below each board to flip it, as illustrated by the red arrow in the image below (note the red arrow will not flip the image!).

We have so far seen some of the great traps which can catch a lot of (maybe most) White players out but what if they do not fall for any of these and play one of the refutation lines? The last three given here are all designed to stop Ng4 which is one of Black’s main attacking themes. Here are these lines and although White may stand better if played correctly, I have mainly used and developed the analysis provided by other Stafford Gambit devotees including two IMs to give a few practical ideas on how to react to them. Please be aware that there are many alternative perhaps better lines for White not mentioned in the analysis so these variations are not for the fainthearted and do come with a public health warning as they contain a certain amount of risk. You may therefore wish to restrict this gambit to only blitz chess.

Most White players do not normally like to play an early 5.e5 as the e-pawn may soon become a target. Trap 7 shows how White can quickly succumb. However, it is one of the refutation lines if followed up correctly and Black needs to be careful not to be overwhelmed.

This is often seen as one of the main refutation lines. It is logical as it defends e4 whilst also preventing Ng4 and not committing with Nc3 (so White can build a wall with c3 and d4 instead to reduce the threat of any Bc5). However, 5.f3 looks a bit awkward and there should be at least one practical way for Black to respond.

This appears to be White’s most accurate way of playing to overprotect the g4 square and not commit the knight to c3, hence it has also been the most analysed. Although the recommendations for Black may not be quite sound, there are some exciting ways for the Gambiteer to play against White’s set up and in some lines the chess engines (favouring White) get it a little wrong, including a +6 assessment turning to zero in some cases! A lot of the research that follows has used some of the interesting ideas from IM Eric Rosen and Jonathan Schrantz.  You may wish to explore their analysis further and assess the undoubted risk before playing these suggested lines, then find your own improvements.  However, they do give a flavour of the fantastic attacking chances Black has if prepared to take a few calculated risks.

Very similar to Refutation No.3, it’s designed to stop Ng4. However it does not stop Black’s dark squared bishop from reaching its best c5 square and Black should be able to drum up enough compensation for the gambit pawn.

(E) Summary and Where Next

The Stafford Gambit is, perhaps surprisingly, very good as it has so many hidden traps which may provide many easy quick wins for Black! When I first saw it, like many others, I did not think it looked at all dangerous but now with a deeper understanding supported by analysis, it has now convinced me otherwise. Even in some of the refutation lines Black can still generate exciting play and stun an unsuspecting, or even a suspecting opponent.

If this gambit was to be ‘scored’ (similar to the Animal Openings), I would probably give it a Strength of 4 and Fun Factor of 9 (out of 10).

I have included independent analysis in the lines above and they should be sufficient but here are some other good free motivational internet links for you to look up.

But the real question is who would dare to play this stunning gambit in a standard non-blitz game? The challenge has been set!

Please let me have your games and good luck!