Bulletin No.66 - Endgame Corner: Two Bishops vs Knight (and Pawn)

Bulletin No.66 – Endgame Corner: Two Bishops vs Knight (and Pawn)

Endgame Corner will be one of the types of bulletin we will be running over the next few months. There won’t be lots of analysis in these (quite often no analysis), but rather I will normally try to quickly summarise whether an endgame is won or drawn, whether or not it is easy to play, and very roughly how to approach it.

We start today with an endgame which to my surprise proved very difficult over the board.

There is a bit of a story behind this endgame as far as I am concerned.   After 55 moves playing Black, I reached the position below against Richard Allis in a B&DCL match.   I knew that two bishops against knight was a technical win and that two bishops against knight and pawn was normally won too.   I had never studied either endgame and had always assumed that winning the pawn was the hard part of converting and that finishing off BB vs N was easy. 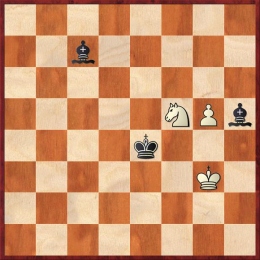 The game continued and I won the pawn in a few moves.   Then I spent the next 40 or so moves trying really hard and getting nowhere very fast against the lone knight, whilst Richard confidently and quickly made reasonable looking moves.  Realising that I could no longer win within the 50 move rule I offered a draw which Richard accepted. I went home feeling like a complete chump for failing to win! Fortunately it did not affect the match result.

The following day I started studying the endgame.  What I discovered was that:

To illustrate the best approach and the extreme difficulty of the endgame it is worth looking at a couple of key decision points from my game against Richard.

Richard has just played 63.Kg3 and there seemed to me to be two valid approaches:
1) I could play 63…Bh5 and start the process of driving the White king to the edge whilst my pieces are nicely coordinated
2) With the knight separated from the king, I could start chasing it, with the idea of winning it by force.

I chose the latter, but the knight slipped passed my pieces easily and soon reconnected with the king and I regretted my decision.   Indeed, when I studied the endgame at home what I discovered was that the following rules of thumb seem pretty good:

The second decision point I remember was in the diagram below.  This is just after Richard had played 84.Nf6 (you can see I haven’t made any progress at all).

My candidate moves here were 84…Ba3 and 84…Bb4 and I chose the latter, largely by instinct as I had little time left to analyse.   Tablebases tell us that after 84…Ba3 it is mate in 38 with perfect play, but after 84…Bb4 it is mate in 60.   When such a small difference in the move makes such a huge difference in the distance to mate you know you have a tricky endgame on your hands!

My study of the endgame made me feel a bit better about not scoring the full point.  And if I reach this endgame again I will be a little better equipped to handle it, but I am rather hoping to avoid it all together!